At first I was going to draw this all out – I did, with VISIO, but the drawing isn’t quite right pretty enough.  It does reflect the solution I’m going towards. 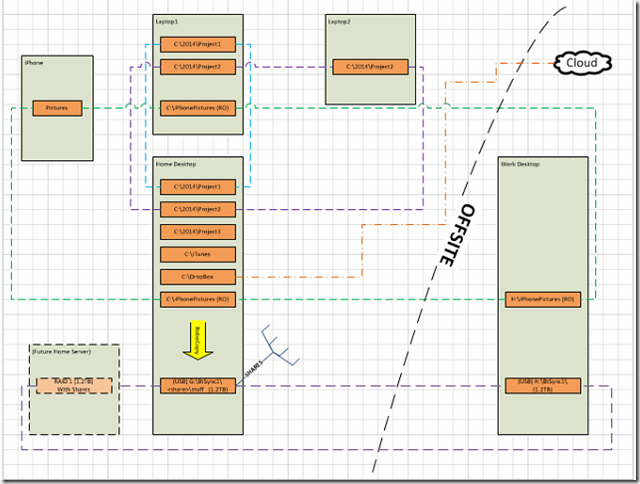 I pretty much use the pattern of:

It would work, but it would be a bit ugly.  Lots of hops going offsite and then back home to get things backed up.

I believe I’ve decided on the following:

For things like backing up Mom’s important stuff, I’d probably create a USB:\BTSyncMom folder and have that be its own pool, not make it sub- or super- to any other sync pool.   Or, continue to use Crashplan there.

Something I Don’t Yet Have

Windows Home Server gave me the ability to restore a machine to a specific state, covering all the installed software on a machine.  I could do that using a copy of Ghost, or some other Hiren tools.    I don’t yet have a plan for that.  On the other hand .. reformatting a machine these days is “no big deal” for me, with all the data being out in the cloud somehow anyway.