And here’s how it was different than my Model Y LR AWD Non-P.

That’s about it. The picture is the car parked under the Chapel thingy in Sedona. The host’s name is Rebekah on Turo, they were great hosts. Highly recommend.

It was a good experience. 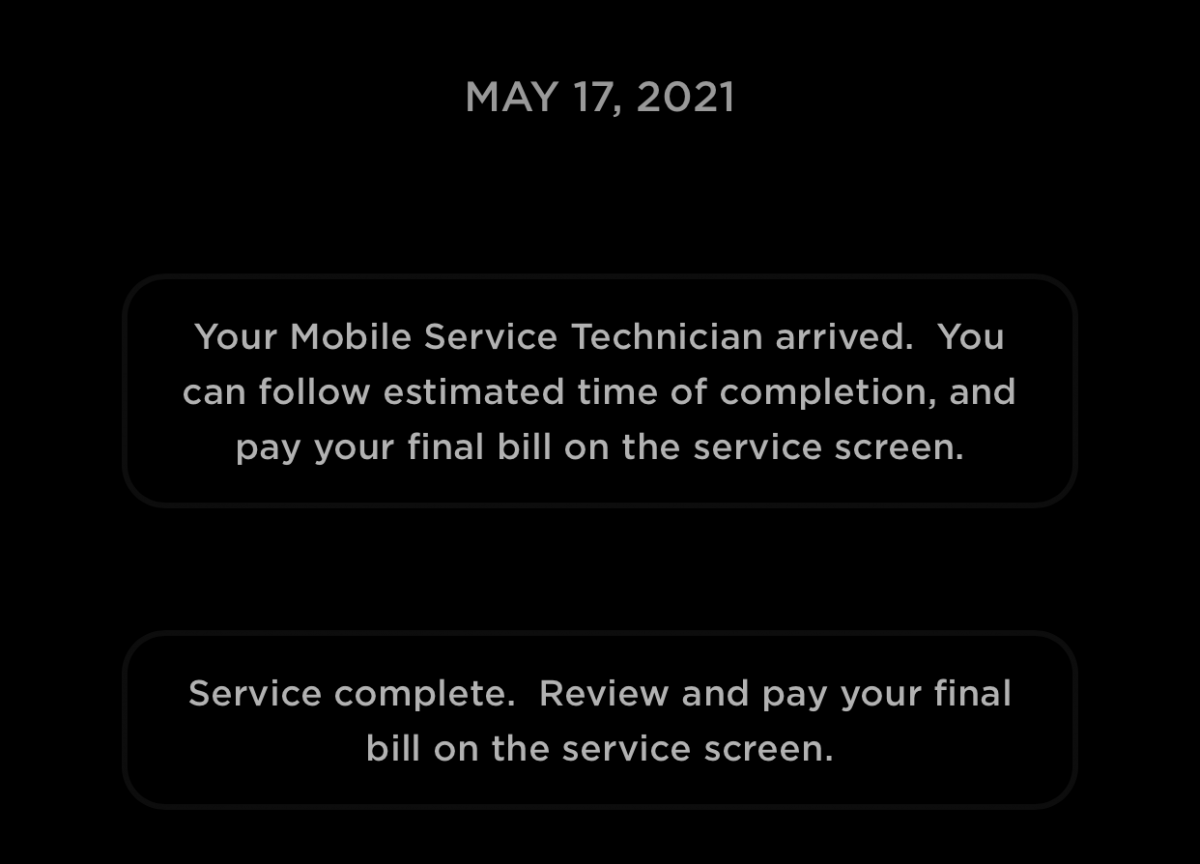 I had my first Tesla Mobile Service Appointment!

Details of the appointment – later. More important is various topics I asked the person about. All of this is my memory, which is faulty, and to cover Teslaperson, I’ll even say my memory can be fillintheblankious.

Messaging – they switched to the Tesla app for messaging now apparently they did text messages before. Many people don’t have notifications turned on, and thus a disconnect.

Service Center in Louisville – not yet, but the numbers are definitely where they need to be to have one. The southern Indian lease thing didn’t happen, but they have a line on another place, but it will be next year before it opens due to current tenant exit and remodel. Currently 3 people working the Louisville market, all local.

Throughput / Backlog – Currently running about 3-4 days out for mobile service in Louisville. Don’t have a lot of Model Y parts in stock yet. If parts need to be ordered, they try to do it within 1-2 days of ticket open, and it takes up to 7 days to get the parts in.

Service Area – because in Louisville, both my work Blankenbaker and Home Pewee Valley are covered. They are out at Blankenbaker all the time.

Third party apps like ABRP etc – they’ve had a 3rd party app that tried to inject firmware code into the card, so no, not a good idea. If you have one that’s working and it doesn’t keep your car “alive” by pinging it all the time, yay for you.

Wipers – yes they replace wipers, its $__, but if you want you can order the wipers directly and watch the tutorial video on how to change it yourself

Rotate Tires – yes they can do that. $__. Faster/easier for one to take to (your preferred tire place)

Cabin Filter – yes they can do that. $__. Around here, once every year or two?

Recommended Service – 2 years flush brake fluid, 6 years flush coolant. You will not get a reminder, its in the service manual. Brake fluid is hydro-absorb-moisture-ic, so it gets funky over time.

Phone Charging Cables working or not working – Rear Seat USB-C Port Authentic Cable Only because Power Only; Front Seat USB-C Port, because Data and Power, most Cables Work. Power turns off when car goes to sleep.

If Console has problems, unplug Sentry stick and format that on a PC. Unpair phones, delete contacts. Fancy Emoji characters can cause problem.

Funky Color on Trim – Its the soap that’s being used (I go to a car wash). I found that if I applied a bit of moisture and rubbed my thumb over it, it comes right off.

Specific repair – Passenger Seat, one of the controls wasn’t working. Turns out the cable going into the servo motor was not plugged in all the way. Estimated cost: $107. Actual cost: $0. They also filled up the air in my tires and removed a piece of packing plastic that came with the car. The appt was scheduled 7:30-12:30, they showed up about 9am.

It was a good experience.

This is from my leg leaving Lexington heading towards Huntington. The Blue line is what it was expecting me to do – this is based on a 100% modifier to the speed limit (70mph). The Green dot and projection is where I was actually at and the estimated battery level at the next charger.

I ended up driving a bit more aggressively. A couple of things to note: The green tracking only was enabled once I got to this screen, and I think only while I stayed on it. (This is on my phone). How you drive has a huge impact on battery drain and range.

So, now I’m planning my return trip. I know more.

A) I can be comfortable bringing the bottom charge all the way down to 5%. I was afraid before of going below 20%. Now that I know i can very easily see where I’m going to end up at, i can lower that to 5%.

B) Faster speed = more drain = longer charging, thus there’s a point at which more speed does not equal more time gained. I’m going to play with that in a moment for the return trip.

C) Most of the Superchargers were at Sheetz Gas Stations, which were awesome. Fresh Decaf coffee, grapes, cheese, good bathrooms. Loved it. I have marked one (Lexington, VA) to avoid due to lack of amenities.

Planning the way back

The actual cost to me is $0, because at the moment, I have 633 free supercharger miles left from someone using my referral code to buy a Tesla. All because I was nice to them on reddit. yay!

The actual driving is amazing. I use Autopilot with assisted lane changes, so most of my interaction is choosing to speed up / slow down to get around people or let people in. The car does most of the driving. I mostly … sit in silence, listen to a podcast, sing, sing more, or talk on the phone, with hands on the wheel. And then the monotony is interrupted with a cute drive to find a supercharger, and some snack acquisition, and walking around a bit. Its nearly perfect.

I finally did it!  We were in Las Vegas, and my wife said yes, so I rented this Tesla Model 3 for a day to make a quick trip to the Hoover Dam and Lake Meade.

I’ve been dreaming about this car for a while.  I had done my research.  So without trying to classify / rate it overall, here’s the individual things I found:

I started out the day in Chill Mode, graduated about halfway through the day to normal acceleration. I only let it loose once going up an interstate ramp.   About 2x or better the G’s than my Nissan Leaf gives me, and way past 45.   Wow.   Pedal about halfway down = what I’m used to as “strong” acceleration.   Probably not something I’d use a lot.

Turn it on, and its like the lane I’m in suddenly developed invisible steel rails and the car started gliding on those tracks.

Car slows down, press brake to come to a stop.  Remove feet from pedals.  Car stays there.  Like “Hold” mode in a Prius going up a Hill.  Very nice.   Very much a fan.

I was worried that there wouldn’t be a lot of “Neutral” coast.. but .. I didn’t miss it. I spent more time in auto-cruise-control adjusting speed with the thumbwheel.. and even when controlling my own speed, there’s a very solid feel of “keep this speed going on.”

I did find that I’d lift my foot a second or two before I intended to slow down – starting to move my foot to the brake – and the car would slow down, startling me.   Probably a few days would get rid of that habit.   Its a different brain circuit.

It felt like I was holding a heavy steering wheel, which was attached with super-strong titanium links to the wheels.  It felt like I could “feel” the wheels through the steering wheel.  Any little input I gave, immediate response.  Is this called “tight”?  And it wasn’t even in Sport mode.  It was amazing.

Drive, Park, and Walk Away.  There is no Off

Easily found.  Easily plugged in.  And then … it starts to ramp up the amps.. and .. OMG, 300 miles in an hour!  (initially). I think we stuck an additional 90 miles on in about 40 minutes.  20 of those minutes were wandering around a convenience store.  It is much more relaxed than when you are getting gas, because you know you’re going to be there a bit.  Which is how I’d prefer to roll – relaxed.  Definitely getting the right snack.  I look forward to taking a long distance trip in a Tesla with Autopilot.

Better than any other car I’ve been in, on par with what I expect Google Maps and Apple Maps to be.  Probably closer to Apple Maps in terms of accuracy – it did miss the start of one offramp entirely, and chose the less optimal way into a parking lot, and the long way around involving a roundabout when a simple left was available.

I think I’d rather get a Model Y.    The Model 3 was too close to the ground.   And almost too cute.   Probably go with gray or black, red is just not me.   Wife says Blue.

I think I’d recommend trying it out.  Granted, this host was maybe better than most?  He had an assistant who took care of all the details and made everything super simple.  Its about the same as how it felt going from Taxi’s to Lyft/Uber .. as it is going from Avis to Turo.  The same corollary applies – its a one to one, pre-meditated thing, with more details to figure out – vs a “go to one place and just get a car” (equivalent to go to one place – at a hotel taxi line – and get a taxi).   While renting, I had insurance cards provided by Liberty Mutual on my phone.    There’s a checkout and check-in process that involves documenting the state of the vehicle.

At the end of the day, I was sad we didn’t have more errands to run.

I wish I could have bought a Tesla.

I’m still super-glad that I switched from an ICE (Internal Combustion Engine) car to an EV.   I do get a little twinge when I see a Prius Prime plug-in-hybrid, however, I have to go back to the big deciding factor:

Yep.  That was the number.   I couldn’t do it with my initial reservation .. maybe I could have done it with the 2019 base Model 3, however, I love technology, and … that would not have been honest with myself.   At least the technology package and AP2, which brings that up to $43k.

However, before I get too far in to my pity party, I need to review:

To be fair, the newer Nissan Leaf had a better range, which solves some of the problems, and if I had done a lease, I could have gotten as low as $300/mo.   However, there’s another angle – I wanted to experience the frustration of a short range EV. So that I have a realistic sense of what was possible/what is not, so I can point people at stuff that’s even better than what I have.

How close till my future Tesla?

If you go to https://www.cargurus.com/Cars/price-trends/Tesla-Model-S-d2039 and play with the dates, I can currently find this chart:

Another tracker:  Used car listings on Carmax … only show Model S’s, and they are way more expensive than the used cars at Tesla.com.

Another track would be a much larger car payment, but .. that’s not something I’m willing to bet 5 years of cash flow on right now.

So here I am.  I DO love that I’m driving an EV;  Yes, its a bit hard and clunky in some ways; but give it a few years or so (time goes by faster as I get older) and lets see.

I’m still feeling a bit icky about it, but running my head through the Math, it still makes sense.