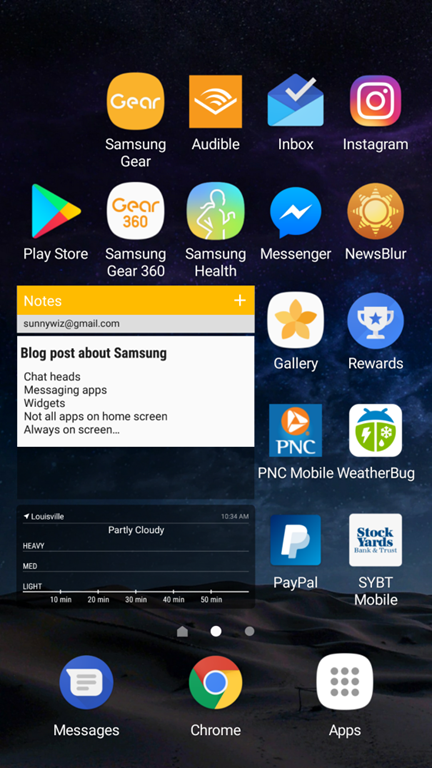 I wanted to write a nice detailed blog post with pictures and screenshots. Would take too long to get it “Perfect” so I am punting.  (I did write this using the WordPress app on the phone)  ** I continued this from my laptop later.

Here are crib notes instead.

Summary: it’s good, it’s functional. It’s less pretty on the watch side, and MMS is subpar, but better voice recognition, LastPass integration, wireless charging make up for that. I’m going to stick with it for a year.

Addendum: it’s frustrating to learn a new ecosystem. And because Android has so many variations it’s hard to know what information applies. For example – getting that screenshot in this post – there is probably a better way but I had to use Google voice to take it, send it to WordPress media library, then include it in this post.   (Addendum to the dum:  Turns out there’s a “swipe left with your palm” gesture for my phone, but I still can’t save the screenshot to my camera roll)

Btw, the screenshot is my second screen, not my home screen.

Thanks to some 3M Command Strips, a $30 Android Tablet (second hand), and Google Docs, we now have an electronic grocery list.  Now I don’t need to take the paper version and update the electronic version every now and again.

I was even able to voice dictate “Chocolate Oreos” into one of the cells.

I’ve had the pleasure (and displeasure) of using both an iPad Retina and a Nexus 10 for the last month and a half.  (this post was started in the last week of December)

This year, the iPad wins.

I dearly wanted the experience to be equal.. I have a soft spot for Android, I love its “intent” system for hooking apps together.. but as an honest consumer, the iPad experience for me in December 2012, January 2013, was better.   And for $100 more.. yes, I’d say it was worth it.

Addendum 2/9/2013:  My wife took over the Nexus for a while.    She is frustrated with it, HOWEVER, having multiple users on the device was clearly a win.     She’s going to get an iPad Mini, it fits her collection of purses better.  (Women are weird) (I like them like that)

Firstly, the repeated exposure to the really cold temperatures in the car, seems to have done something to my Droid battery.  It no longer charges when hooked up to the “normal” chargers; I had to hook it up to a 2.1A ipad-level USB port to get it to charge.  Rut-roh.  (Luckily my brother in law has given me his extra batteries from when he had a Droid, so I might have a spare.. but I may not be able to leave it in the car during the winter.  Data logging might be over for the time being).

Secondly, I found out I’m uploading the wrong folder. [Maybe].

No problem.  I synced up the other folder instead, and…

None of my code works anymore!

I’m going to have to do some refluctoring.  Or, decide that I like reading from Torque’s internal “triplog” (I found the separate option for turning this on/off) more than the “tracklog”.

Also, I’m having trouble getting PeasyCam to work in Processing, it gives me some fun exceptions.   More on that later, when its more baked, but basically trying to do 3D renderings of Long,Lat,Time to determine the differences between the many routes I can take to work. There’s a lot of filtering and scaling work to do yet.

I have been searching for a Twitter app for my Nexus 10 Android tablet for a few weeks.  None of the ones I have tried have worked for me.   Here’s the list so far.  My apologies to a developer if I misrepresent your app, kindly correct me and I’ll retest.

Echofon: While I love this app on iOS, the android version does not [yet] mute by client.  Its not very tablet-friendly either.  When they do, I’ll likely switch back to them.

Plume: The inline rendered pictures are far too wide (and not tall enough) to be useful.  Still too wide in three column mode;  and I wish that the three columns could all show information from the same stream.  But no, I have to look at 3 month old direct messages instead.

Flipboard: tries to be smart about what it will show and what it won’t, resulting in missed stuff.  And doesn’t mute but heck its like its muting everything. Very pretty though it has the best UI.

Seesmic: So far, its working okay.  It does previews, it does mutes, and while it is not intelligent about using all the space available on the tablet, it’s the least obnoxious one (apart from Flipboard).

What am I looking for?

If I were to dream I would want an app that did the above and:

I would probably call the app “SquareReader” or something like that.    Except that there’s a credit card processing tool that seems to have the dibs on the word “Square” at the moment.

Ah yes.  If somebody would pay me for the time, I’d write it.