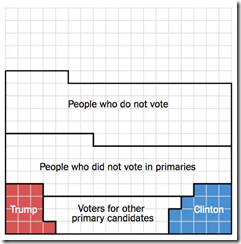 I have a jumbled thread of stuff in my head, that .. maybe if I put it out as a post, I can clear my mind.   I would not normally make this post here; but as I think about it — this is definitely a good indicator of how I think.  This blog is about showcasing my strengths.  This is a strength.  So yes, I’ll post this here, and claim this part of myself as part of my public persona.

“Why are you always defending ____?”   asks my wife.  Resulted in a lot of internal conversation, which resulted in this post.   TLDR: I want to make gazoonkingly sure that I have opinions but don’t hate holders of the opposite opinion.  So I feed myself from both plates, make sure my emotions are stable, and then make a perspective choice, rather than an emotional one.

I don’t want to feed the craziness out there, I’d rather help bring unifying order.   Yet, I am not in control of other people.   However, someone I respect urged, if I don’t state my opinion, how can those who want to listen, listen?   Also hence this post.

As I expressed to a friend, if 51% of the country votes for Trump, even if I disagree am not in agreement with them, their group conscience has spoken.  If that does happen, I think it will be a spectacular 4 years, which will end in either “wow, we didn’t want to go here” unification, or, even more polarization.  At some point in time, with enough polarization, it might warrant a country-sized split.

My perception of Hillary

How does one tell somebody, that I think they’re being take advantage of?    Maybe its not possible.  I’ll approach it from another angle.

That sets the background.   Then, enter this:

What I think is going on is, a pretty long-running campaign, that uses some cognitive viruses out there – tap on people’s emotions.  Once the emotions are tapped, folks’ minds close down.

There’s some reference to some of the .. crazy depths that this got to, here:  https://www.whitehouse.gov/the-press-office/2016/10/13/remarks-president-ohio-democratic-party-dinner  (search for: “political expedience”).

Interestingly, any time somebody wants to bring “logic/reasoning” etc in to talk about stuff, there’s a programmed defense that the virality goes for: Call them “IYI”, intellectual-yet-idiot.  If you google that phrase, fun times.

At this point, only the folks with something to sell, would benefit in this system.   Discourse is right out the door.

Also at this point, for anybody in the middle of such a system to risk entertaining any new thought – would be to risk cultural rejection of the culture that surrounds them – and just won’t happen.   The backlash would be too hard.

How did I change my mind?

I started off in another camp – I had several soundbites in my head, of how horrible HC was.    I decided to abandon them, and go searching for pro-candidate information for all the candidates in question at the time, which were Bernie, HC, DT.   I also went looking for stuff on GJ, I didn’t get a chance to research JS at the time.

The best piece I found on HC was this one:

Note, I would have been pro-Bernie, but I think they made the right choice.    I think his platform was too radically different, and thus change would have been much harder.

I did go looking for stuff on DT.  I wanted to find something that showed him as intelligent, thoughtful, concerned.     I couldn’t find it – most of the stuff that I found was using virality and emotions to effectively do a sales job.    I would LOVE to have found something where he was in a business meeting being very intelligent and being a good leader and directing people in a way that brought them up – that’s the leadership style I prefer – and I am biased and this is about me – and I couldn’t find that.

GJ – I liked what he _said_ he represented, however, I found him too easy to excite.    And at times, he seemed, well, stoned.   So while I agree with him on many points, not sure that he would be effective.   His running mate, on the other hand – amazing and wow.   Wish he would run.

JS – recently anyway, I didn’t look her up earlier –  I found her to not have an in-depth understanding of the details of issues, kinda waving her hands in the air, broad gestures.   I don’t think she would be effective.

I have several friends who are voting for the T.     Here’s what I perceive about them – this is also a bit of creative rambling, me casting things onto them, that’s probably more a reflection on me than them:

None of them are overtly racist.  None of them overtly hate.    And if you don’t get them, then they’ll nod, sigh, wish you got them, and then they move on, with their world, and you don’t matter to them.

I love them, and I get to honor them.  That’s the world they live in.

There might be other Pro-DT folks who are, shall I say, edgier, but in general, I don’t know / maintain relationships with / people who hate.

Why not vote GJ instead of HC if I don’t agree with DT?

I often see this diagram in my head on this subject:

Granted this is about the primaries, and I think turnout is higher for the actual election, but the idea is that, if everybody actually turned out and voted, it would be very easy to get an independent elected.  So vote your conscience, vote independent.      That would work for me, IF I didn’t think that HC had some merit.  However, I DO think she has merit.    So, I’m –10 about trump, probably an 8 about HC and maybe a 6 about GJ.  Lets say I was a 10 about GJ.    I’d rather do an STV vote, and put GJ first, then HC, and just not include DT, to make sure he NEVER got my vote.

But we’re not in STV.     And I do think HC is more fit for the job than GJ, assuming that there’s support in the congress / senate, which is another beast entirely.

I think that’s about it.   I don’t think this would convince anybody about anything.    I am one small vote in a large sea of votes, and this is approximately how I reasoned my way to where I’m at now.

I would hope that the country I choose to call home will go for listening, acknowledging, lifting people up, but also not enabling dependent behavior.