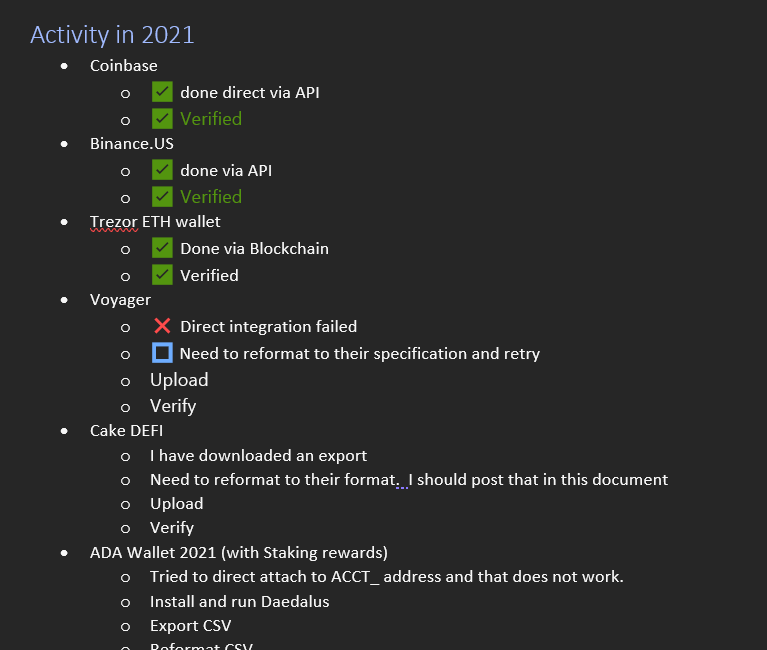 First, apologies for folks who posted really good comments on one of my previous posts — been busy. I went from Grandparent-of-two to Grandparent-of-four, and they live with us, and … its amazing, but man its hard to get time to think. Mostly we’re taking care of the older two while mom recuperates from C-section and the newer two are integrated. #devops #fixitinprod

Earlier in the year, I made a decision – heck with Taxes, I’m going to investigate Crypto things. So I did – I investigated liquidity mining, and staking, and some other mining, and stuff and stuff. And now .. i’m paying the price (in time).

I used to use cointracking.info (no link). I ran into problems. Something as easy as importing ETH transactions from my Trezor – 34 entries. It shows a balance.

There is no balance. Using their data from their screen, in excel, added it up, NO FRICKING BALANCE. See here with Blockchain explorer. And their import from Binance.US – very broken.

I lost faith in them. So, I need to switch.

I’m trying out cointracker.io instead. Good news, they integrate well with various well known things. Bad news, lots of other stuff I have to do a lot of labor to get data over. Hence the checklist which I posted a screenshot of earlier. Pretty sure I’m going to leave “free tier” here shortly (5 wallet limit), but I suspect I’d have to do that with whatever I went to with the amount of experimentation I’ve done.

A particular pain: I was hoping I could connect cointracker.io to binance.com directly – but binance.com is serious about locking out anybody from the US. I can’t log in there anymore. Not even read-only. Bummer. Luckily, I DO trust the info in cointracking that I got from Binance. Just takes some reformatting.

And is all of this worth it? Well, for the experience – yes. However, my stint in Liquidity mining – Sure I got some returns, but the impermanent loss was made permanent. And Staking – its ongoing, but it feels like I’m gaining at exactly the loss-of-value-due-to-inflation rate of the currency (DFI). They promise something awesome when they do X Y Z in the next 2 months, I think I’ll probably pull the plug around Christmas, I don’t want to deal with the headache of reporting 2 transactions per day of staking rewards paid in the future. And I fear what Cardano’s upcoming liquidity contracts will do to DFI’s world.