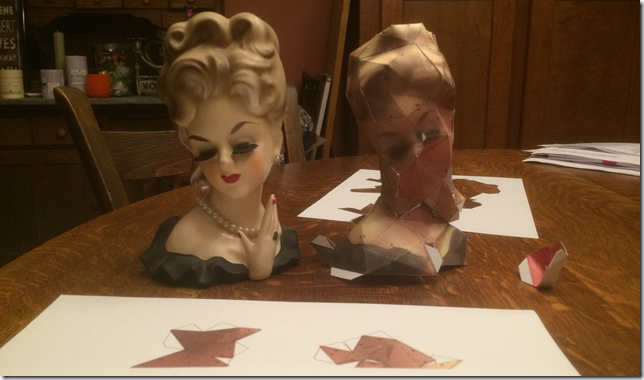 This time, I printed things out on cardstock.   Bad move – Cardstock doesn’t bend very well, I had to pre-bend every bend, and even so, the thickness of the paper caused some things to move out of place over time.

I think it would be better to make certain pieces from cardstock, and the rest from regular paper, however you would have to “open” the model just right to get the pieces just right and not obvious.

Also, the resulting struture was just too complicated to put together.  There’s no way I can get the red piece on the right glued into her head correctly.   Or, there’s a way, but its too frustrating to keep at it.

One thing I can point out though:  In Pepakura, I said, “Model Height=160mm” .. and yes, the final model matches the original fairly well.   That’s a win.

I’ve decided I’m not spending any more time on this particular model, too many other fun projects to play with.