This time, I printed things out on cardstock.   Bad move – Cardstock doesn’t bend very well, I had to pre-bend every bend, and even so, the thickness of the paper caused some things to move out of place over time.

I think it would be better to make certain pieces from cardstock, and the rest from regular paper, however you would have to “open” the model just right to get the pieces just right and not obvious.

Also, the resulting struture was just too complicated to put together.  There’s no way I can get the red piece on the right glued into her head correctly.   Or, there’s a way, but its too frustrating to keep at it.

One thing I can point out though:  In Pepakura, I said, “Model Height=160mm” .. and yes, the final model matches the original fairly well.   That’s a win.

I’ve decided I’m not spending any more time on this particular model, too many other fun projects to play with.

Here be a picture of Dan with his head in his hand.

This was done using a video of his head, broken out to frames.. etc etc .. and then an exacto-knife, and glue.  The head was rendered with 200 faces, and then further simplified (delete a bunch of complicated faces, fill holes).

I wish there was a way I could print this on plastic that would shrink about 5%, so that I could put a texture around a 3D print of the same thing. 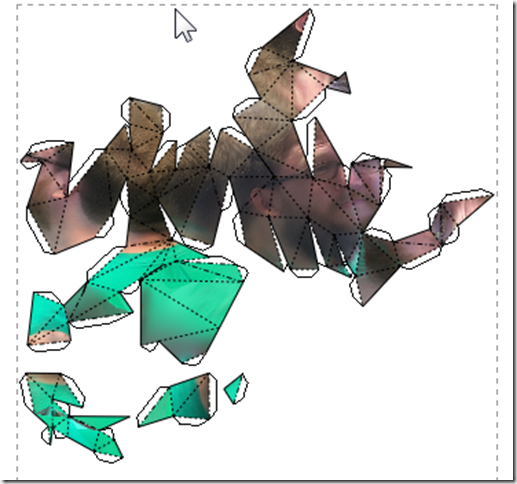 I’ve been playing with “structure from motion” / “photogrammetry” apps for a bit.  Lots of stuff still to figure out, but here’s a possible interesting path.   Note that none of this is optimal – wrong camera, wrong print medium, etc – but its fun.

1.  Start with a Video of walking around The Dude Abiding.

[youtube=http://www.youtube.com/watch?v=XkrIkdK0kjI&w=448&h=252&hd=1]
He owned the copy of Lebowski that I watched, so I associate him with the Dude

(His name is Joel, he’s one of my coworkers, he also teaches kids how to code)

3. Load them into Agisoft PhotoScan ($179, or you could go 123D Catch from Autodesk, that one is free, but possibly less accurate?).   Run “Align Cameras”, get point cloud.

4. Crop in the model box, hit Build Dense Cloud.  This is where it starts to look really interesting.

5.  Build a Model .. Build Texture.  This is what the result looks like at “medium” resolution:

Not the greatest, but that’s because of the camera I used (video compression = artifacting = bumps) plus camera lens distortion etc.

Build a model at lower resolutions:

Note that this saves both a .JPG and a .PNG texture.  JPG on the Left.    I might be mistaken, but I think they were saved at the same time.   Actually, the .JPG might be the overall “build me a texture”, and the .PNG is the “export my model to wavefront”.   It’s a little freaky.

I haven’t done this part yet.

These screenshots were from my second attempt.  Here is Joel holding my first attempt, which was 500 faces, a bit too complex: